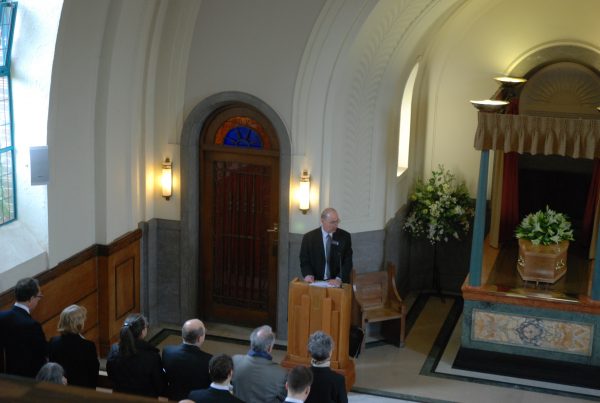 Would you have “Metallica” played at your funeral?

Many next-of-kin I come across as a funeral celebrant have not given much thought to the funeral service they are supposed to be putting together. They certainly haven’t planned their own.

Often, it is because of that very British reluctance to speak of death at all, let alone think about it. How many euphemisms have we got for “dying”? “Pushing up daisies”, “passing away”, “passing on”, “gone to the next world”, “croaking” are just a few.

However, like taxes, death is an inevitable part of life.

A funeral celebrant can discuss all this – in the comfort of your own home – with you or your loved one, and can set your mind at rest.

He will offer ideas and guidance that reflect your feelings and wishes (or, indeed, those of the deceased).

What you may not realise – and this applies especially if you don’t want a full religious service – is that there is a lot of choice out there. Not just participants, readings, order of service, ritual, tone, attire, etc. But also the music.

In a lot of the funerals I conduct, the families choose some fairly conventional music – “Amazing Grace”, Classical pieces, various hymns like “Jerusalem” or “All Things Bright and Beautiful”, Frank Sinatra’s “My Way”, and the like. And there’s nothing wrong with that.

However, there is no reason why you shouldn’t have more “way out” music, if that’s relevant and suitable for the occasion. One of the most popular songs these days is “Always Look on the Bright Side of Life” from Monty Python’s “Life of Brian”.

We all had a huge smile on our faces when, for the funeral of a 92-year-old female fan of Freddy Mercury, we went out to “Killer Queen”.

For a rabid Chelsea supporter, we played the Chelsea theme “Blue is the Colour”. It was what we simply had to do.

I was a little concerned when it was suggested that we listen to a piece by Metallica at the funeral of a biker who had taken his own life. Although my prejudice may seem understandable, in this case, “Nothing Else Matters“ was absolutely perfect and, let it be said, a fine piece of music too.

Music is so evocative. It should be chosen with care, especially for a funeral.

Normally, you expect the entry piece to be rather solemn, but to leave on something more uplifting. There’s no reason not to have something amusing at a celebration of life. The essential is that the music probably should reflect the deceased’s taste (or, possibly, passion) and/or reflect the connection between the loved one and his/her family.

But music can be almost anything, so long as it’s well-considered. Even Metallica,if you want!